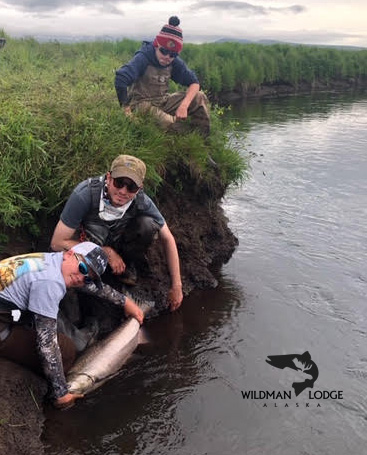 Two young anglers, Dakota and Cheyenne Van Weelden 9 and 12 years old had to have set the Wildman Lodge record for numbers of King Salmon landed and released in two days. While Cheyenne preferred the spinning rods, Dakota was quite handy with the 9 weight fly rod. On their first fly out day for King Salmon the two boys released 50 King Salmon with the assistance of guide Dylan Thompson.

They were determined to beat that record on their second fly out day. By the end of the day, the boys landed an even 60 King Salmon. We all stayed on the river about 30 minutes into overtime, but they got it done. The Van Weelden family released every King they landed, each taking home a box of bright Sockeye.