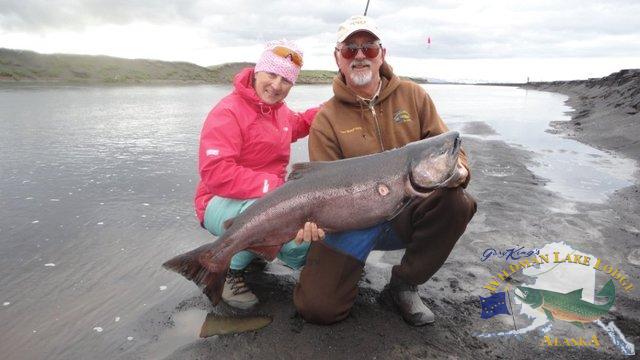 This huge male Alaska King Salmon was landed by Nancy Branchaud on her first Alaska fishing adventure.  Nancy was fishing on the Alaska Peninsula with Gary “Butch” King of Wildman Lake Lodge. The King, stripped line well into the backing before it reached the far bank of the river. It was quite a battle, regaining line on the reel, which eventually ended in the demise of this giant male King Salmon, netted by Pilot Guide, Chad Johnson.  This big King, estimated at forty pounds, was the largest landed today by our seven anglers, who flew out of the lodge this morning.  Weather was text book, calm winds and partly cloudy.  We look forward to bringing you more King Salmon action during this 4th of July week.